Since 2015, Coach Leusby has been the head coach of the Almont Football Program. He started off as an eighth grade coach, before serving 13 years as the JV head coach, and assisting on the Varsity offense. He also coaches Almont Middle School boys basketball in the winter season.

Coach Leusby is a math and physical education teacher at Almont High School. He is a graduate of Reed City High School where he lettered in Football, Basketball and Wrestling. He graduated from Central Michigan University in 2001 and has his Masters degree in Administration from Saginaw Valley State University.

When Coach Leusby is not coaching in Almont, he helps coach his daughter's travel softball team and his son's AAU team. His family (wife, Lindsay and their children, Emily and Treyton) try to get in as much traveling and family time. In the winter off season, they enjoys snowmobiling, hunting and skiing up north near his hometown.

We will be welcoming Coach Malcolm’s back this season with the Almont JV football team.  Coach Malcolm has previous coaching experience with Eisenhower High School, Dryden Jr. Cardinals and Almont Youth Football.

Coach Malcolm is a 1994 graduate of Eisenhower High School in Shelby Township, MI.  Rob is very excited to be a part of Almont Football and the traditions that go along with the program.  Rob and his wife, Carla, are residents of Almont and have 3 children, Jackson, Olivia and Izzy.

This year will be Coach Davedowski’s 6th year with Almont Football Program. Again, this Fall he will be joining the JV staff afters spending a few years coaching the MS team.

He began coaching in 2012 when he moved to Almont with his wife and 3 kids, Blake, Chase, and Arianna. His son Blake wanted to play flag football and that is where his involvement in Almont Youth Sports coaching career began. Since then, he has coached baseball for AYBA, soccer at North Macomb, basketball for 4th, 5th and now 6th grade. He also coaches flag football at his church and will continue to do so now and in the future.

Coach Bacholzky is a math teacher at Almont High School.

Coach Bacholzky is a 1999 graduate of Almont High School and is very proud and excited to be a part of the Almont football tradition. He and his wife, Heidi, are residents of Almont and have two sons (Matthew and Evan) that attend Almont Schools. 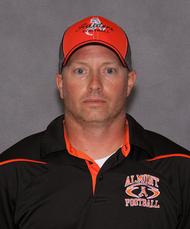 After starting his coaching career many years ago in Almont, Coach Walker is excited to return to his alma mater. He spent 2 years as an assistant coach with Coach Leusby and Coach Beneson at the JV level before becoming Almont's first ever Freshman Head Coach. He then left to become the Junior Varsity Head Coach at Whitmore Lake High School.

Coach Walker is glad to be back coaching the defense. He, his Wife, and his children reside in Almont and as a local business man, Coach Walker excels at representing the orange and black and creating growth opportunity for the Almont community.

Coach Miodowski joined the coaching staff in 2019 after spending his time head co-coaching the MS program. He also plays a prominent role in Almont's Youth Program. ​

Coach Miodowski is also the Coach of Almont's Powerlifiting team. After football games ends, you can find him gearing up the young men and women for their lifting competitions.

He resides in Almont with his wife, Amy, and children Morgan, Madison, and Samantha.

Coach Beneson is no stranger to Almont Football. He has been coaching along side Coach Leusby since the JV days, before leaving to coach girl's basketball for a short time. Now he is back on the field and heads up the defense for the Raiders.
​

Coach Beneson currently teaches 8th grade Science at the Middle School.​ He resides in Macomb Twp. with his wife, Judy, and their three children, Jillian, Julia and Mason.

2021 was Coach Loomis’ inaugural season as head coach of the Almont MS Football Team. Coach Loomis has 7 years of head coaching experience within the Almont Raiders Youth Football & Cheer (“ARYFAC”) program. He began in Flag Football and coached all the way up through Varsity Youth Tackle. Coach Loomis also served on the ARYFAC Board of Directors for the past 6 years in various capacities. His principal responsibility was the implementation of football specific schemes, systems and fundamental techniques that were based upon core principles of the Almont High School Football Program, yet appropriately “watered-down” for the given skill level of each age division.

Coach Loomis and his staff are well-equipped to mold these young men to play high school football.

Chris and his wife, Amy, are residents of Almont and have one son (Luke) that attends Almont Middle School.

Coach Nosek is no stranger to MS and HS football. He has been involved in football and baseball programs for 20+ years. He recently had the privilege to work under his mentor, Frank Sumbera, at Grosse Pointe North where he had the opportunity to work with all levels of the North program, as a head coach of the Freshmen team for one season, Junior Varsity Defensive Coordinator and Assistant on the Varsity. He was the Head coach of Junior Varsity Baseball team at North and worked with Varsity program as needed. In the 2019 season, he was an Assistant Coach at Southlake High School.

Coach Forti has 20+ years of football coaching experience. His experience ranges from JV assistant to Varsity head coach. Coach Forti also coached professional indoor football in Port Huron for 3 years and in 2006 won the GLIFL championship as offensive coordinator with a 12-0 record. Coach Forti is not new to Almont schools, he was previously an assistant varsity baseball coach for two years.

Having coached against the Raiders on the gridiron for many years, Coach Forti is well aware of the rich football tradition at Almont and is excited to be part of it.

He graduated from Wayne State University and received his master's degree at Marygrove College. He currently teaches Health and Physical Education here in Almont. Coach Forti, his wife Lesley, and their four children live in Imlay City.

Coach Orzel
He has been involved with Almont Football since he could first play, starting his football career with the Almont Junior Raiders. He was a four year starter for the Almont Varsity Squad, a weight room warrior, and also a leadership member his junior year, and a captain his senior year. Chase also took his Almont football dedication, and attitude to play a few years of Division II college football for Northwood University, where he played RG for the Timberwolves. ​

Coach Orzel's passion for the sport shows not only on the field, but also in the weight room, he can be seen encouraging the players to stay strong. Not only does he have a strong passion for the sport, he also has a great amount of knowledge about this great game. Coach Orzel works with the defensive and offensive lines.