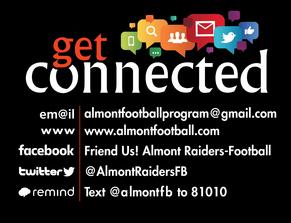 BWAC Honorable Mention Awards for their outstanding play on the Field goes to ANTONIO NEDELKOVSKI and TRENTON KRUSE.

Almont Awards
All Academic Award it is awarded to the Senior player with the highest GPA. WILLIAM KALMAR III

The Outstanding Non-Senior award is given to an underclassman that has had a major impact on the season, a player the team has come to count on in big moment and never lets the varsity spotlight distract them, they are accountable on and off the field and have become the one players the coaching staff believes can execute the game plans. CHASE BATTANI

Oil Can Award is given to a player that motivates others and keeps the team focused and together throughout the grind of a long season. He is a player that puts the TEAM FIRST and his energy and attitude set the tone of practice each day. TRENTON KRUSE

Defensive Player of the Year award is given to the player who had the biggest impact on defense, not only stats wise, but also making sure we were in the right calls. TYLER FILINGER

Offensive Player of the Year is given to the player that had the biggest impact on offense. His teammates wanted and trusted him to have the ball in key situations, they knew he could make something happen. MATTHEW MEASEL

The Team MVP award is given to the player who had the biggest impact on the field of play. Like the above awards, this one is voted on by the team and coaches. BRYCE FERMAN

These next are awards that are voted on by the coaches around the state. It starts with getting selected to the All-Region Team by your local coaches in your region, then if a player is selected to the All-Region Team they then become eligible to be selected by the state coaches who have voting rights to select the All-State Team for each division. This year we had 2 players earn such post season honors… BRYCE FERMAN and TYLER FILINGER

With his All-Region win, this next player, achieved the highest honor one can receive as an individual athlete playing in high school sports. Today we add TYLER FILINGER to that special group of players on our ALL-STATE wall in the hallway.
Congratulation to all the players and coaches for an amazing 2022 season.